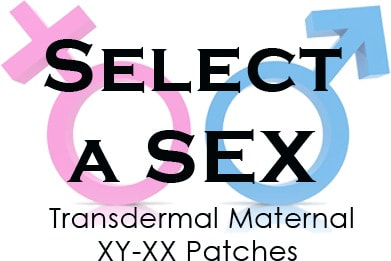 SEX PATCH - Select a Sex - Select Sex of your baby

SKU:
0 169 $169.00
$169.00
Unavailable
per item
Select a SEX Maternal Patch lets you assist nature in choosing the gender of your baby. Backed by many years of scientific research, the small patch is drug free, all natural, 100% safe and works only when worn by the mother which is for a few days during her fertile period.


For centuries, parents have been fascinated while trying to influence the sex of their baby, and this has given rise to an abundance of myths and old wives tales on everything from the timing of sex, to sexual positions, diet, lifestyle etc. All too little or no avail.

With the advent of DNA, researchers have realized that the gender of the baby is determined by the type of chromosome in the particular sperm (that fertilizes) the egg. Of 280 million or so sperm in the average ejaculation, they are almost equally divided into sperm that carry the X chromosome, and those that carry the Y chromosome.

A gender selection patch is applied in the groin area once menstruation has stopped, and replaced, once daily, for 10consecutive days.

The natural ingredients in each type of gender patch diffuse through the skin into the circulatory system in proximity to the cervical area, and enter the cervical mucous. The minor changes they make to the cervical mucous give a significant advantage to either of the x or y sperm to influence who will win THE race. That determines the sex of the baby.

Glands in the cervix produce a viscous cervical mucous that allows only about 200 sperm to survive the arduous trip. Both the X and Y sperm traverse the SIX INCH cervical canal swimming in the thick mucus and make their way equally well to the egg.
​
This results in the egg being fertilized with a 50/50 possibility of an x or y sperm. When the XX or XY transdermal patch is worn by the mother there are subtle changes that temporarily occur in the cervical mucus. These changes create an environment whereby, depending on the selected patch, the X or Y sperm has a decided advantage in moving through cervical mucosa and reaching and fertilizing the egg, in effect the selected sperm& has a decided advantage in winning the race.
The XY patch contains: Natural antioxidants including catalase, an enzyme and natural antioxidant found in every cell of your body, but now bolstered, and an extract of anthocyanins, compounds found in berries and purple eggplant. The XV patch also contains ellagic extract fro pornagrantes, the amino acid arginine and royal jelly.
The XX patch contains: An ultra absorbable blend of vitamin D3 with calcium and magnesium, saw palmetto extract, cranberry extract, olive skin extract.
Directions for use:
​
Add to Cart